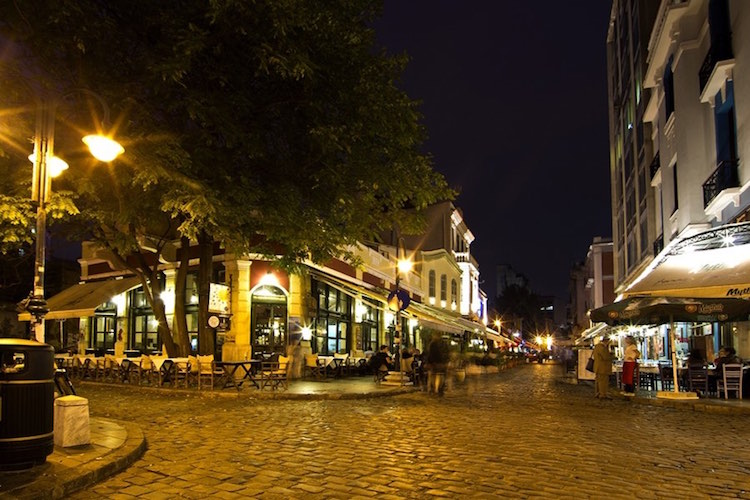 Thessaloniki is a city with a rich history and Ladadika is no different. When Ladadika is translated to English it means a shop that sells oil. Greece has always been famous for its olive oil, this is also very evident in the Greek cuisine and diet.

Ladadika can be dated back to the Ottoman rule. Being very close to the port makes it an important part of the city. Ladadika lost some of its charm after the fire of 1917. For many decades it only hosted oil shops but was reinvented in the early 1980’s with a few café and bars. It was also known as the red light district of Thessaloniki during the Second World War. Ladadika has constantly changed with time but it continues to be a favorite spot for the tourists and the locals.

Ladadika is a short walk from the hustle of Aristelous square, the streets of this area can be found quieter during the day, but the quietness doesn’t detract from its beauty with colorful two-level buildings and the occasional line of orange trees, giving the area a warm and friendly feel. Each restaurant has its own unique character, which is even depicted on the outside of the buildings as well as in the inside with the theme of the décor. Plant veins can be found climbing up building walls, colorful chairs in the outside restaurants, art on sides of buildings and even a parrot in a cage on the street gossiping to people passing by.

In the evening, the restaurants come to life as locals and tourists fill the area, the once quiet streets turn into a buzz of nightlife and the ambience is suddenly transformed with lively chatter. Majority of these restaurants serve traditional Greek delicious food & local Greek wines. You cannot go wrong with your selection of restaurant in this area of town. Each restaurant looks and smells as amazing as the next. The restaurants are always lively in the evening with people from all over the city and world.

However, if the buzzing atmosphere of the center of Ladadika isn’t you’re thing, you can take a stroll along the beautiful port of Thessaloniki. The port of Thessaloniki can be dated back to 316 BC, established by King Cassander. The port has always been an important port despite the numerous invasions. It has a direct connection to the Balkan and central Europe hence making it an important trade route. It became a part of the Greek kingdom in 1913 under King George I. It was a port for the Allies in the First World war and was captured by the Nazis during the Second World War. It was used to transport Jews to Poland where a small Jewish population survived. The port is now very busy and an important part of the city.

Now the port not only has a breathtaking view of the city from across the water but it is still heavily used. The port has also taken preserved the importance that this part of the city played in history. Big iron gates create the grand entrance to the port. Once inside, the area is very clean and organized. Each tree perfectly planted in a stoned edged soil area and stone benches have been placed strategically along the pathways. One building is designated for the history of the port, informational videos and photos along with descriptions in both English and Greek can be found inside. The historic port is a great place to visit to see the stunning view of Thessaloniki and appreciate the numerous activities taking place along the waters edge.