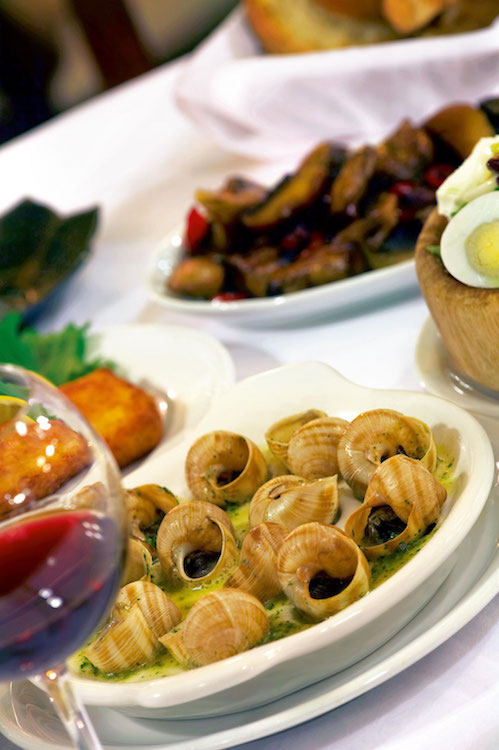 “When I was a graduate student, I lucked into an anthropological study that would take me to the fountainhead of European culture, Greece. There, I would dive into a 6,000-year-old cultural continuum, with principles of governance laid down by Plato, science by Aristotle, poetry by Sappho. I was in scholarly bliss. As a child I’d played Aphrodite and Artemis with my dolls. I’d read Gods, Graves and Scholars: The Story of Archaeology when I was 12. Only, little did I realize, when I elected to do that study, that I’d get to relish all that history in an entirely new way.

I would eat it.

Plunging into the many millennia of Greek civilization is like biting through the layers of a phenomenal baklava, which is essentially what I’ve been doing for the 30 years or so that I’ve been living, cooking, and working in Greece. On that inaugural trip, the first meal that I was served by my welcoming landlord in the village where I settled, a porridge of yellow lentils lavished with a serpentine pour of verdant olive oil and sprinkled with wild capers, took me to the bottom strata of that edible history, for it smacked of the Minoans and their precursors.

The mysterious Minoans were among the first residents of Greece. When they arrived, around 2700 B.C., they brought with them domesticated grains, sheep, and goats. They adopted the almonds, the nuts of the mastic bush, and the yellow pulses that were being cultivated by more-ancient peoples already living in Greece, and they found wild grapes, from which they made wine. They also discovered a bitter native berry they began to cure and press. The resulting edible, the olive, and its liquid lucre, olive oil, became the economic foundation of their civilization.

On my second night in Greece all those years ago, my new neighbors and I devoured a dish of crisp honeyed fritters, called loukoumades, that evoked the arrival of Greece’s next inhabitants: a people who had strayed from their homeland near the Ural Mountains and who spoke an Indo-European dialect that we now know to be ancient Greek. The Greeks drove cattle before them, and on their carts they ferried the most venerated food of their native land: honey, as well as the bees to produce it. They added those foods to the pantry of the Minoans and expanded the local larder further. The Greeks invented bread and soon contrived a hundred different kinds.

They developed wine as none had before, evolving varietals and marking each amphora, the clay vessels used for storing the drink, with year and origin. They cultivated orchards of fruit and nut trees, husbanded swine, goats, sheep,  and cows, and raised poultry, from chickens to swans. They grew an abundance of vegetables and gathered myriad greens. Fish became so essential to their diet that they came to know exactly which inlet contained the best of each species. They enhanced dishes with wild oregano and sage and imported cinnamon and pepper. They invented games of strength and prowess for which triumphant athletes won “trophy,” a term that in both ancient and modern Greek simply means food.

The Greeks brought their culinary innovations to the regions into which their culture expanded: places we now call Italy, France, Spain, the Levant, North Africa, and India. Then, in 146 B.C., an envious power rising to their west, the Romans, subdued them. The Romans idolized and augmented Greek foods to further flamboyance: from them came the thin phyllo pastry dough used to make spanakopita and sweetened pies, as well as tiropita, a cheese turnover. Then came the Ottoman conquerors, who ushered in assorted Central Asian provender like rice pilaf and jellied rose water loukoum.

In the 1800s, exotic fare began to arrive from the New World: tomatoes, squash, potatoes, and beans, each to be given a Greek inflection. From the bounty of this potpourri, Greeks have spun a captivating cuisine. Great weavers that they have always been, plaiting wool into tapestry, ideas into philosophy, the Greeks have done the same with their food, merging threads of influence from every era. In conventions that hark back to antiquity, they marry savory meats and vegetables in stews laced with mountain herbs. They stuff peppers with everything from cheese to rice, sultana raisins, mint, and nutmeg, each ingredient traceable to a different place of origin. They braise wild game, like rabbit, as did the region’s early hunters.

Following the model of their classical ancestors, they turn their sun-blessed vegetables into olios, or vegetable melanges, so fine and filling that there hardly seems a need for further sustenance. And they fold nuts and fruit into sheets of dough and bathe the pastries in syrups of honey, muscat, citrus, and brandy, a technique imparted by Byzantine chefs.

But, as I learned when I eventually settled down in a little village on Santorini, Greek food not only tells the story of the past; it is also very much a cuisine of the present. Indeed, the Greek way of cooking and eating has endured for so long not because it is preserved in amber but because it has adapted and expanded so nimbly. In so doing, it has inspired the cuisines of other parts of the world. Put simply, the Greek way just makes good sense. The meze tradition of feasting on small dishes, which has spread throughout the Mediterranean and the Middle East, is a casual, companionable way to eat that suits the human spirit.

The inherent healthfulness of Greek meals only adds to their appeal: plenty of olive oil, wild and garden vegetables, plus beans, chickpeas, and other legumes, as well as fish, some dairy, and not too much meat. What’s more, Greeks who practice traditional ways of cooking and eating are the living embodiment of the term_ locavore_—even today, most Greeks eat predominantly what’s grown nearby, a circumstance necessitated in part by the remoteness of many of the country’s regions and islands.

That somewhat fractured geography—Greece comprises two peninsulas surrounded by far-flung islands—has given rise to a fascinating quilt of regional cuisines that are nowhere near as well known around the world as those of, say, Italy or France. From rugged Epirus, in the western mainland, come hearty pies and stews made from the lamb and river eel that thrive there. Macedonia still produces the great wines that Alexander tippled; its capital, Thessaloniki, once held one of the world’s largest Jewish populations, and dishes there reflect Sephardic and even earlier Jewish influences.

Cool Thrace, in the northeast near Turkey, with the ancient Roman highway running through it, offers barley pilafs and sour-milk noodles, foods introduced by the early Greeks. The vast peninsula known as the Peloponnese—where the Mycenaean civilization, enshrined in Homer’s epics, flourished—is famous for roasted goat, rustic breads, and honey. Crete, the island that was the epicenter of Minoan culture, is known for ancient foods like trahana, tiny kernels of air-dried yogurt and grain that plump up like couscous when boiled. There are the Ionian islands, where specialties like_ karithopita_, a walnut cake flavored with cinnamon, attest to years of Venetian rule, and in Athens, that fabled and vibrant metropolis, one can sample the creations of acclaimed contemporary chefs who unite multiple streams of their country’s cuisine in inventive ways.

Not only has this regionalism given life to different subsets of Greek cuisine, it has imbued Greeks with a strong sense of local identity and pride. My little village on Santorini is what I consider to be the perfect place to eat and learn and live: there are the ruins of a major Minoan city on the island, a mountaintop into which are carved some of the earliest examples of Greek writing, and farms all around growing grapes, wheat, melons, sesame, and tomatoes.

My friends are poets, farmers, workers, and, most of all, cooks: they grill red mullet, dislodge sea urchins, and stew up so many bowls of yellow lentils, topped with everything from tapenade to sardines, that they’re teased for it. Capers grow wild and are brined in sea salt. Residents gather wild oregano, thyme, sage, and rue and make their own wine. Every time I return there, I savor those ingredients, the tastes of which first seduced me all those years ago.”

By Susanna Hoffman, author of  The Olive and the Caper (Workman, 2004)